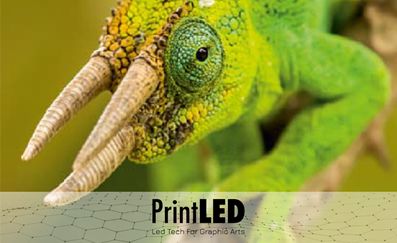 03 Aug How can UV LED technology transform the printing processes in 4.0 industry?

Posted at 10:24h in News and Events by mentadmin

For many industrial and medical applications, the UV light used today is traditionally produced by UV lamps based on Mercury vapor. As an example, it’s been since long time proven that particular ultraviolet light waves (UV) have a strong germicidal effect – damaging irreparably DNA and RNA – on microorganisms such as viruses, bacteria and fungi (in 1903 the Nobel Prize in Medicine was awarded to Niels Finsen for successful utilization of UV rays against tuberculosis).

Nowadays, there are UV emitting LEDs available on the market with features that – in most cases – can efficiently replace conventional Mercury lamps.

So, not surprisingly the use of Mercury will soon be banned by the European Community and the United Nations (UNEP – Minamata Convention 2013), because of its proven negative environmental impact.

PrintabLED – now PrintLED – was born from the idea (EU patent n. 2848092) of replacing the more common Mercury vapor lamp’s technology with UV light sources from LEDs to cure inks and coatings in Industrial Printing. LED UV lamps have many advantages: up to 90% reduction in energy consumption, Mercury and Ozone elimination and much increased stability in time of the UV light emission.

The ability to transform an idea into an industrial reality enabled PrintLED to install more than 80 systems in Italy, Central Europe, Middle East, with more than 120.000 cumulated operating hours.

In 2017, PrintLED was awarded of the first prize for innovation at Metpack, the world’s largest trade fair for Metal Packaging in Germany, winning against much larger and consolidated companies.

Then, what actually are the sustainability advantages of LEDs in the curing process?

First of all, Energy saved is more than 80% compared to old systems, thus reducing the CO2 emissions (Carbon Footprint) of the production. Moreover, safety for operators is improved: no more Ozone in the working space, no more high Temperatures and no more high Voltage in the Presses. Specifically, e.g. LED UV lamps operate at case temperatures below 60°, instead of a few hundred °C, as the traditional UV Dryers.

It’s not only about attention to Environment and Safety: Clients that choose PrintLED technology immediately benefit of more profitability. Production is streamlined, takt time is shorter, scraps are lower, much less solvents are in the workspace (no odors), set-up of the press is faster and simpler to repeat.

Furthermore In many projects, with PrintLED’s solutions, it has been possible to increase overall production capabilities and capacity.

Let’s summarize in some key concepts this relationship between the environment and UV LED technology throughout the curing process, compared with traditional UV:

PrintLED’s unceasing attention not only to evolution of technologies, but also to sustainability in the industrial printing processes is a strong added value, a belief, a way of being – that delivers strong proven value to its customers.

PrintLED ® UV LED lamps are designed with a modular concept that allows a simple and quick installation.